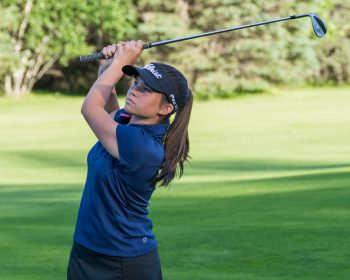 The Golf Manitoba Scholarship Fund (GMSF) provides financial assistance to young golfers who are starting or continuing with post-secondary studies in Canada. Since 1986, the Fund has awarded over 215 scholarships totaling over $252,500 to 36 different golf clubs throughout Manitoba and Northwestern Ontario.

The named awards include the following:

The Craig Yahiro Memorial Scholarship award is made possible by a charitable golf day and social that is held annually at the Rossmere Country Club and in memory of the late Craig Yahiro. Craig Yahiro was a long-time member of the PGA of Canada where his skillful instruction and great sense of humour helped many improve their game. Craig’s commitment to his craft was recognized in 2009 when he was voted the PGA of Canada – Manitoba Golf Professional of the Year.

The Brian Gilhuly Memorial Scholarship award is made possible by the generous donation made from the estate of the long-time Golf Manitoba volunteer, Mr. Brian Gilhuly. Brian started his volunteerism with Golf Manitoba in 1986 where he served in a variety of capacities for over 30 years until his passing in late 2017. He became a course rater in 1991 and became the Chair of the Handicap & Course Rating Committee in 2001. Brian completed over 200 course ratings during his tenure. In 2010, Brian was awarded the Golf Manitoba Distinguished Service Award. The Selkirk Golf & Country Club also recognized his long standing commitment to the club in 2004 by honoring him as a life member.

Golf Manitoba Scholarship Fund awards are available to all Golf Manitoba members in addition to those young people who are currently involved with golf either through employment or participation. Scholarships are awarded based largely on academic achievement, however golf ability and community involvement are also considered.

To apply, applicants must download and complete the application form (link below). The annual deadline for applications is June 30th.

There are no administrative or other charges against the Fund. The earnings of the Fund are used exclusively for the granting of scholarships.

The Board of the Fund recently determined that it would be in the interest of the Fund to establish the Golf Manitoba Scholarship Endowment Fund with The Winnipeg Foundation (the “Foundation”). Benefits of doing this include making the Fund sustainable, almost certainly increasing the amount available to annually distribute as scholarships and the receipt of some amounts from the Foundation added to the endowment as further donations are received.

The GMSF is managed by a volunteer Board of Directors, made up as follows:

As a non-profit organization, the GMSF relies on donations as an essential source of revenue. The GMSF acknowledges the incredible support it has received over the past 30 years and looks to the local community for support. The Fund has been greatly assisted in building its Capital Fund through the generosity of Golf Manitoba, various golf clubs and other organizations and individuals.

There are a number of ways that you can help:

Individually, we encourage you to include the Golf Manitoba Scholarship Fund amongst your gift giving considerations. A direct contribution will yield a tax-deductible receipt. Should you wish to honour someone or make a memorial donation, we ask you to consider our Fund as one of your charities of choice. We assure you that appropriate acknowledgement will be passed to the individual or family concerned. Should you have a specific consideration, please contact us directly and we will be pleased to discuss it further.

As members of member clubs, we ask you to take our message back to your Boards and committees. Your clubs can certainly assist. Some clubs have made direct contributions to the Scholarship Fund. Others have included us in yearly assessments or as part of specific tournaments. For example, if each club assessed each member an additional $1.00 earmarked for the Golf Scholarship Fund, significant capital could be added to our base annually.

Planned giving. Planning your estate and legacy for future generations including your charitable interests takes careful evaluation. Consulting with professionals about your charitable intentions can lead to a much better result than going it alone.

The GMSF can provide valuable information about creative giving techniques and will ensure that your gift is used just as you wish.

If you or your golf club would like to support the Fund, you can make a donation on-line (see link below) or by sending a cheque to the Fund to:

The Golf Manitoba Scholarship Fund is a registered charitable organization with the Canada Revenue Agency and all donations will yield a tax-deductible receipt.