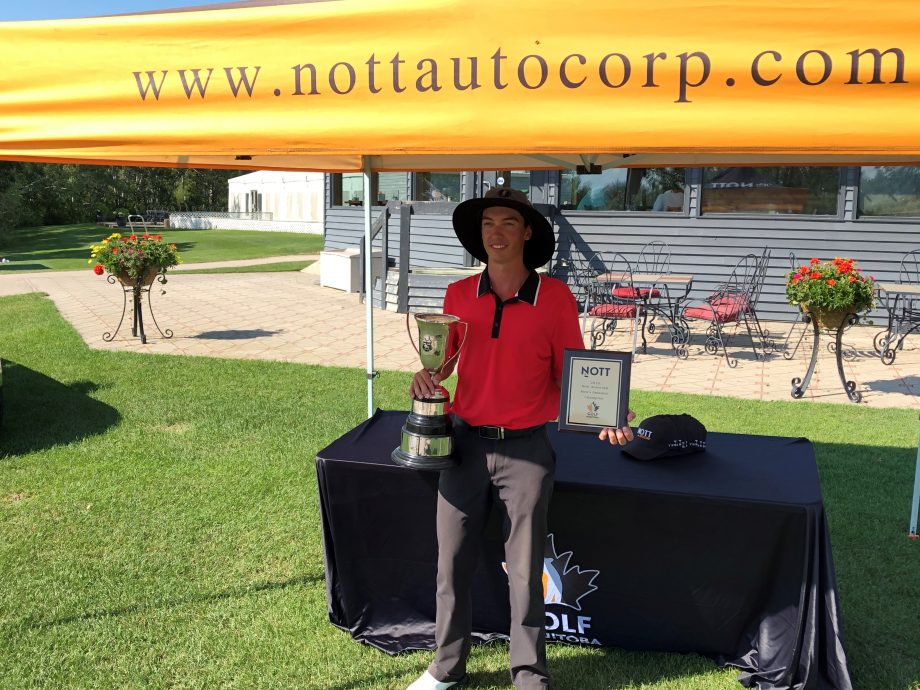 After three rounds of 71-71-72, Abgrall found himself in the final group with first round leader and 2019 Match Play Champion Austin Dobrescu who plays out of the Shilo Country Club. The two were no strangers to one another as they met earlier this year in the Match Play Championship Final. But for Abgrall, the outcome was in his favour this time around. Dobrescu made things interesting with a birdie on the 70th hole to tie for the lead at 1-under, however Abgrall made birdie on the 72nd hole to post a final round even-par score of 72 for four-day total of 286 and a two shot victory over Dobrescu; Abgrall was the only player to score under par for the championship.

Finishing in third place was Jordy Lutz of Elmhurst Golf & Country Club who finished seven shots behind of Abgrall on rounds of 74-74-72-73. Abgrall, Dobrescu and Lutz will now represent Golf Manitoba, the province and their homes clubs in the 2019 Willingdon Cup inter-provincial team competition that will take place at the 115th Golf Canada Men’s Amateur Championship August 5-8 at the Glen Arbour Golf Course and The Links at Brunello in Hammonds Plains, Nova Scotia.

August will turn out to be a busy month for Abgrall who also recently qualified to compete in the U.S. Amateur that will take place August 11-18 at the Pinehurst Resort & Country Club. Abgrall earned one of two spots in the championship by finishing second in the sectional qualifier held at the Fargo Country Club on July 8, 2019.

Quarry Oaks Golf Course is set to host the 2019 Nott Autocorp Men’s Amateur Championship. 2018 champion Justin McDonald of Breezy Beed Country Club is in the field of 80+ players who will tee it up July 15-18.

All four rounds of the championship will be contested on the Desert-Quarry rotation of the 27-hole facility. According to Head PGA of Canada Golf Professional Darren Hayden, the two courses are very different in look and playability. The Desert is a target based course that puts a premium on accuracy and shot placement. The Quarry nine includes plenty of tree-lined holes and penalty areas that will test the player’s ability to commit to shot execution. Both nines offer an opportunity to play some holes aggressively but at the risk of taking high numbers. Weather conditions are also known to shift quickly during the round which will also test both the patience and endurance of the field.

Hayden also commented that that course is in excellent condition. The greens have been rolling well and have been receptive all year long and the fairways are giving up some roll which will help to soften the 6,641 yard layout. The turning point of the championship could come on the Quarry nine that features the unique island green 6th hole, that will play the 15th hole in the championship. The 167 par-3 island green will put a huge premium on club selection and yardage control.

Hayden said the course set up will be challenging, but fair with daily conditions dictating hole and tee placements.

For more information about Quarry Oaks, visit their website at quarryoaks.ca

For more information about the Nott Autocorp Men’s Amateur Championship including live scoring, visit our championship page or follow Golf Manitoba on Twitter.

About Nott Autocorp: Nott Autocorp’s mission is to provide the most comfortable buying experience by delivering affordable luxury and exceptional service in a unique atmosphere. The Nott’s are heavily involved in many community charitable events and understand the importance of strong example of integrity and leadership which has been an underlying principle in their success. Nott Luxury Auto & Art Gallery is located at 1322 Waverley Street (at the corner of Waverley & McGillivray) where you can shop indoors in their 20,000 sq. ft. showroom and view art from local artists. Learn about our Nott Autocorp at nott.ca.