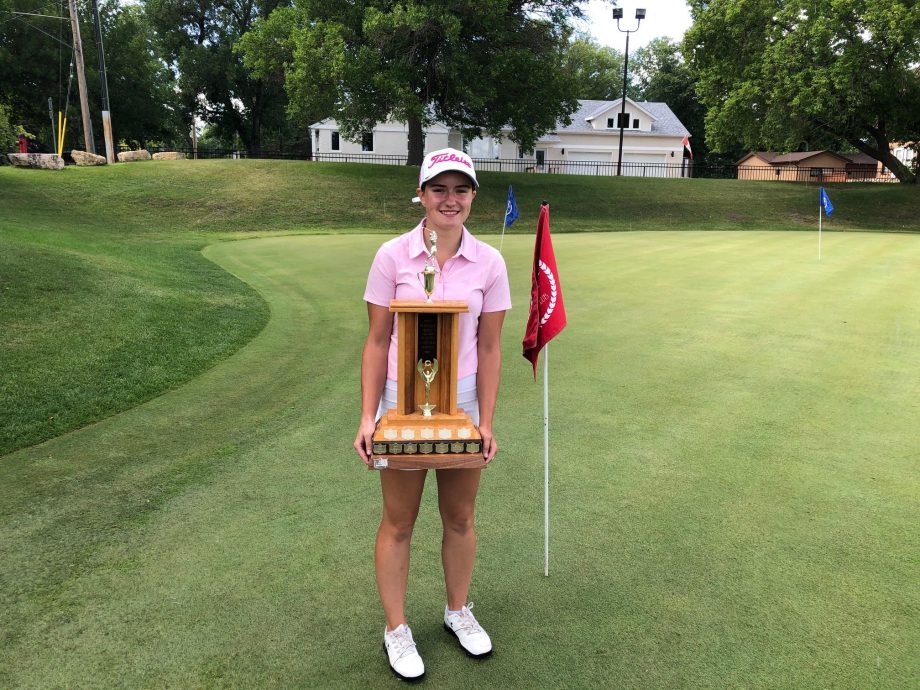 In the junior women’s event, Crystal Zamzow took a one shot lead into the third and final round of the 54-hole event. Zamzow was able to hold her lead throughout the day by carding a 14-over par round of 84 for a three day total of 240. It was a wire-to-wire victory for Zamzow who held the lead all three days of the event. It is also her first junior women’s championship.

Finishing in close second, was Mikyla Albert who shot 83 to finish just two strokes back at 242. Alone in third, was Cala Korman who shot a final round 85 for a three day total of 243. The low round of the day went Jeri Lafleche of Clear Lake Golf Club shooting a 10-over par round of 80.

In the men’s championship, round two had to be completed early Tuesday morning due to play being called to darkness the night before. Braxton Kuntz of Breezy Bend lit up the Selkirk track with a 3-under par 67 to move into a tie for second. First round leader Need Soni of St. Charles posted an even par round of 70 to take a three shot lead into the afternoon’s third and final round.

During the final round, it came down to the 72nd hole for Neel Soni to claim his first Junior Men’s Championship. Soni and Kuntz were tied after 71 holes of play.  After both finding the middle of the fairway with their tee shots and both missing their approach shots short and right on the 72nd hole, only Soni was able to get up and down for par which earned him a one shot victory.  Soni finished the day with an even par 70 for a 2-under par total of 208 against Kuntz who posted the round of afternoon firing a 2-under par score of 68 to finish at 209. Finishing alone in third, was Carter Johnson of Rossmere Country Club who shot 70 for a three day total of 212.

In the Junior Men’s Interclub championship, it was team Rossmere #1 of Lachlan Allerton, Trey Ross and Carter Johnson shooting a best two of three 36-hole total of 9-over par 289.  In a close second and just one back, was the team of Jacob Armstrong, Payne Wood and Scott Miner of St. Boniface shooting 290.

Golf Manitoba would like to express its sincere thanks Marg Homenuik, president of the Alex & Peggy Colonello Foundation, for the Foundation’s tremendous support of these two events!!!

A big thank you also to all the competitors who helped make this another great event!