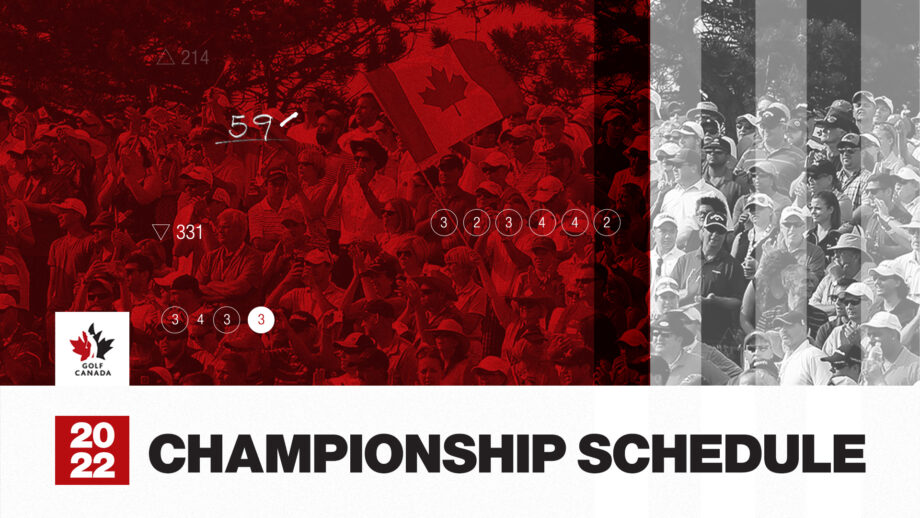 Golf Canada is pleased to announce its 2022 championship schedule, which includes amateur and professional competitions in addition to various qualifiers hosted at golf facilities across Canada.

As the National Sport Federation and governing body of golf in Canada, Golf Canada conducts the country’s premier amateur and professional golf championships  to support the development of the nation’s top talent through world-class competition.

“Golf Canada is incredibly proud to return to a full championship schedule in 2022 and welcome more than 3,000 talented Canadian and international athletes to our national championships,” said Golf Canada’s CEO, Laurence Applebaum. “Together with our host clubs, corporate partners, and volunteers that help drive the success of our events, there is incredible momentum in our sport as we look ahead to the 2022 season.”

Golf Canada’s championship season kicks off on May 13 in Nanaimo, B.C. with the NextGen Pacific Championship, fueled by JOURNIE Rewards at Nanaimo Golf Club, and concludes in October with the World Junior Girls Golf Championship, presented by Sargent Farms at Angus Glen Golf Club in Markham, Ont.

Championship Season at a Glance…

The 18th playing of the Canadian University/College Championship, presented by BDO will be held June 1-4 at Golf Château Bromont. The championship includes both a team and individual component featuring Canada’s top university and college talent.

The 67th Canadian Junior Girls Championship, presented by BDO will be contested July 26-29 at The Marshes Golf Club in Ottawa, Ont. where the winner will earn an exemption into the 2023 Canadian Women’s Amateur Championship and the 2023 U.S. Girls’ Junior Championship.

The 117th playing of the Canadian Men’s Amateur Championship, presented by BDO will be contested August 1-4 at Point Grey Golf & Country Club in Vancouver, B.C and Seymour Golf & Country Club in North Vancouver, B.C. A maximum field of 264 players will be cut to the low 70 players and ties after 36 holes, with the final two rounds contested at Point Grey. The champion will receive an exemption into the 2023 RBC Canadian Open, as well as an invitation to the 2022 U.S. Amateur Championship. The winner will also receive an exemption from local qualifying for the 2023 U.S. Open, and if applicable, will earn an exemption into the 2022 U.S. Mid-Amateur, 2022 U.S. Senior Amateur or 2023 U.S. Junior Amateur Championships.

The Canadian Men’s Mid-Amateur Championship, presented by BDO will be held August 23-26 at The Thornhill Club in Thornhill, Ont., while the club is  celebrating its 100th anniversary this season.

As part its centennial anniversary, Red Deer Golf & Country Club in Red Deer, Alta. will host the Canadian Men’s Senior Championship, presented by BDO from September 6-9, with the champion earning an exemption into the 2023 U.S. Senior Amateur Championship.

The second playing of the Canadian All Abilities Championship, presented by BDO, a national championship for players with neurological, intellectual, sensory, and physical impairments, will be held September 13-14 at Essex Golf & Country Club in Windsor, Ont.

An accomplished field of international competitors will take to Angus Glen Golf Club in Markham, Ont., from October 10-15, for the seventh annual World Junior Girls Golf Championship, presented by Sargent Farms. The event will welcome 25 countries playing as 3-member squads competing for both a team and individual title.

Golf Canada has also confirmed that it will not be continuing with the National Orders of Merit, beginning in 2022. Previously used to track golfer performance, the rankings will be replaced by a comprehensive talent identification system that supports the new Canadian golf high-performance strategy. 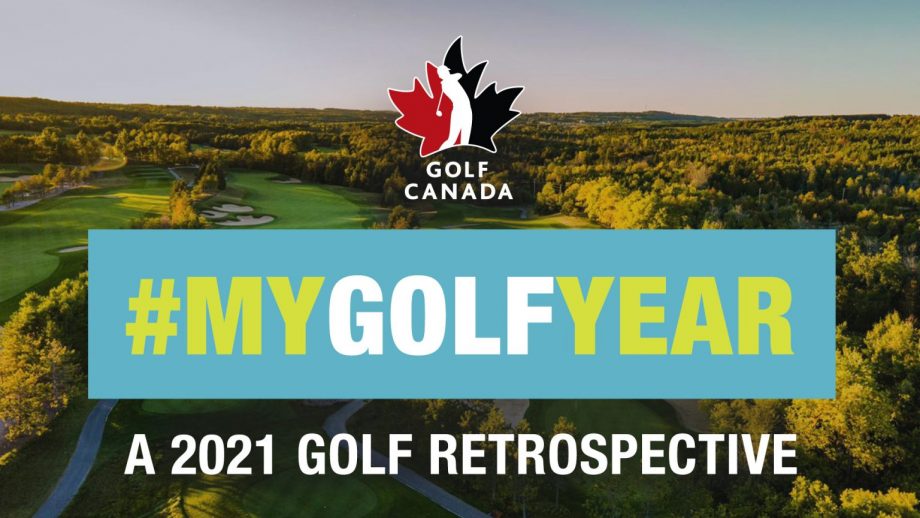 OAKVILLE – (Golf Canada) – Some golfers claim their favourite aspect of the game is recanting highlights (and maybe even some lowlights) with friends following a round of golf.

Now, members of Golf Canada and their respective provincial golf association who track their games with Golf Canada Score Centre can do just that… digitally.

Introducing Golf Canada #MyGolfYear – a retrospective of a member’s golf year generated by the scoring data posted to the Golf Canada Score Centre in 2021.

Statistics on the graphics, which were emailed direct to members on December 28th, 2021, include total best round, number of holes played, distance played and most-played golf courses.

Golfers who posted scores using hole-by-hole method will see additional statistics added to their graphics, including total number of pars, birdies or better and holes-in-one.

Golf Canada is encouraging members to share their graphics with friends via email or post them to their favourite social networking platform using the hashtag #MyGolfYear. Below are just a few examples shared since the inaugural campaign launched.

NOT A MEMBER? JOIN GOLF CANADA AND START TRACKING YOUR GAME

Round 1 at the Canadian Men’s Senior Championship 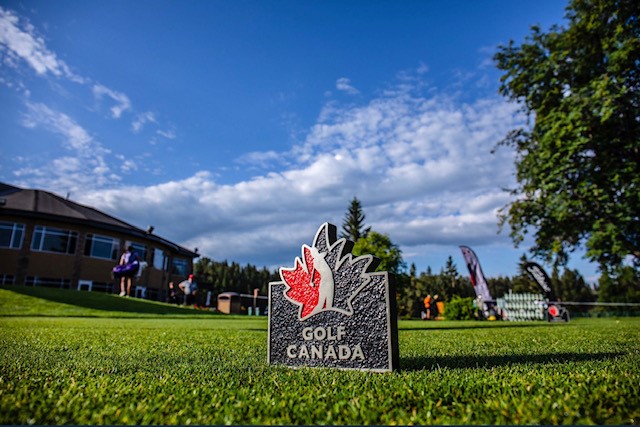 Allan Ross of Calgary was the only player to shoot even par in the opening round of the Canadian Men’s Senior Championship at the Club de Golf Le Manoir Richelieu in La Malbaie, Quebec.

Ross’ 72 is one stroke better than Darren Ritchie of New Brunswick, Saskatchewan’s Rick Hallberg and Norman Bradley of British Columbia.

Tom Humniski of Elmhurst Golf & Country Club is the top Manitoban carding a six over par 78, placing him 30th on the leaderboard.

Heading into this selection camp, Golf Manitoba Junior Boys Development Head Coach Derrik Goodwin believes the future is bright for Taylor based on what he puts into his preparation.

“It has been a privilege to watch Jack grow over the past couple seasons. Implementing regular strength training and fitness sessions into his regular routine has really allowed him to take the next step in his game. Jack has become bigger and stronger, allowing him to pick up some serious distance off the tee” said Goodwin. The detail he puts into his golf training sessions is something all juniors can learn from. He comes with a plan to the course each day knowing exactly what he is going to practice, and how he is going to practice it. From short game to full swing, he is constantly working his plan to improve. The biggest part to his success over the past year has been his off-season training. Jack doesn’t take time off; he continues to work on his swing and putting indoors in the off-season which keeps him sharp 12 months of the year.”

Taylor played his first round at TPC Toronto at Osprey Valley carding a six over par 78 and is tied for 18th on the leaderboard. 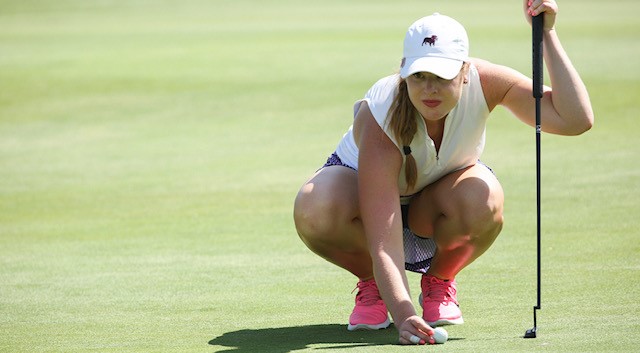 Three golfers all from British Columbia are separated by only three strokes after two rounds at the Canadian Women’s Mid-Amateur & Senior Championship.

Nonie Marler of Vancouver is atop of the leaderboard after carding a 77 in her second round and sits with a 149 total. Christina Spence Proteau of Port Alberni (77-150) and Nanoose Bay’s Shelley Stouffer (73-151) are right behind.

Hannah Diamond of St. Charles Country Club is the top Manitoban in Mid-Amateur play tied for 10th after her second straight 80.

Jennifer Jones of Breezy Bend Country Club is 19th following an 89 and sits at 179.

Southwood Golf & Country Club’s Rhonda Orr is tied for fourth place, four strokes off the lead in the Senior Championship following a 77 today. 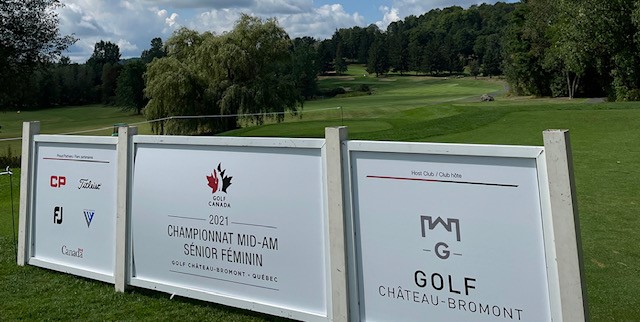 Nonie Marler of Vancouver shot a one under par 72 for the low round of the day to open the Canadian Women’s Mid-Amateur & Senior Championship in Quebec.

Hannah Diamond of St. Charles Country Club is 9th on the leaderboard following an 80.

Southwood Golf & Country Club’s Rhonda Orr is only two strokes off the lead in the Senior’s Division after carding a 78. 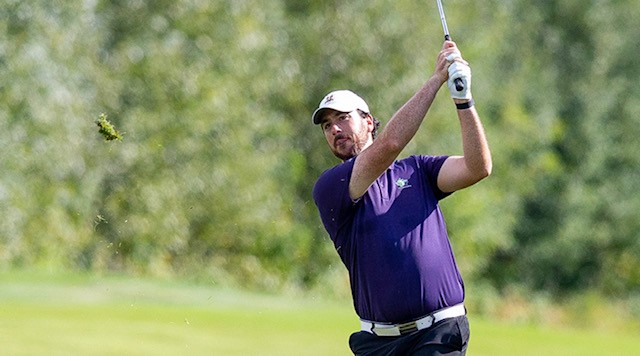 Charles Fitzsimmons of London, Ontario was the only competitior to finish under par and finished with a four stroke victory at the Canadian Men’s Mid-Amateur Championship in Fort McMurray, Alberta.

Jack Werhun of Elmhurst Golf & Country Club carded his second consecutive one under par 71 and finished 11th on the leaderboard with a 298 total.

Ben Bandura, with a 74 in his final round and 301 total, finished second in the Mid Masters Division. 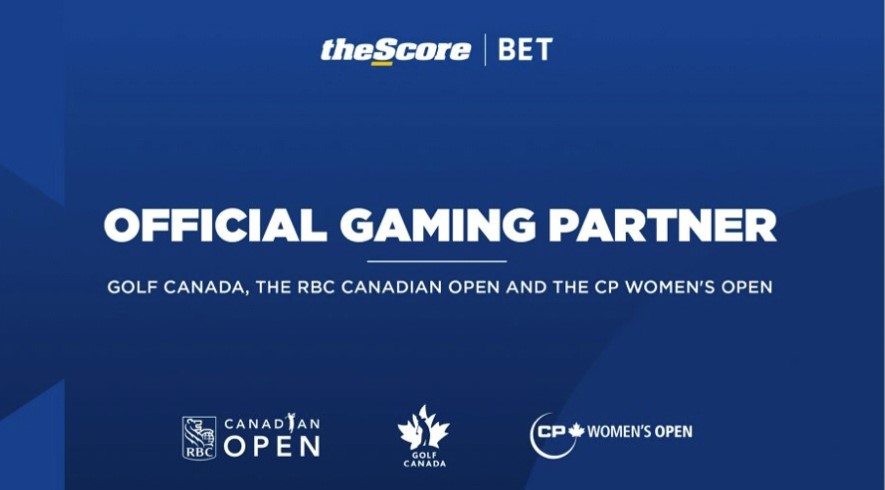 The partnership, which begins in 2022, provides theScore Bet with access to activate across Golf Canada’s high-profile events and large digital footprint. As an exclusive gaming partner of the RBC Canadian Open and the CP Women’s Open, theScore Bet will be able to engage fans through a variety of on-site activations, including creating members club experiences for theScore Bet users, as well as digital activations through both tournaments and Golf Canada’s channels.

Bill C-218, which legalizes single event sports betting, was proclaimed to come into force on August 27, 2021, with regulated online iGaming and sports betting offerings from private operators expected to commence in Ontario later this year. Both the RBC Canadian Open and CP Women’s Open will be held in Ontario in 2022. The RBC Canadian Open is scheduled to be held in the Greater Toronto Area in 2023 and 2024.

“We are thrilled to welcome theScore Bet as Golf Canada’s first Official Gaming Partner,” said Golf Canada’s Chief Commercial Officer, John Sibley. “theScore brand is already synonymous with sports coverage in Canada and we’re enthusiastic about the opportunity to team up to help build awareness for theScore Bet. Through Golf Canada’s entertainment properties and channels, theScore Bet will have direct access to engage with our large membership of devout Canadian sports fans.”

“We are proud to be Golf Canada’s first ever gaming partner and align theScore Bet with their organization and Canada’s marquee professional men’s and women’s golf events,” said Aubrey Levy, Senior Vice President of Content and Marketing, theScore. “This partnership provides us with highly engaging access points to introduce theScore Bet to a broad and endemic audience of golf fans. With the RBC Canadian Open taking place in Ontario for all three years and the CP Women’s Open in the province for at least the coming year, it provides us an amazing foothold to interact with Canada’s passionate golf community around two of the most popular golf events in the country.”

The 2022 RBC Canadian Open will be held June 6-12 at St. George’s Golf and Country Club in Toronto with nearby Islington Golf Club hosting the championship’s practice facility. The 2022 CP Women’s Open takes place August 22-28 at Ottawa Hunt and Golf Club in Ottawa.

In March 2021, theScore Bet was named Official Betting Operator of the PGA TOUR across the United States and Canada, pending the enactment of enabling legislation and regulation, and receipt of all necessary regulatory approvals.

theScore Bet is an immersive and holistic mobile sports betting platform which includes a wide range of pre-game and in-play betting across all major sports leagues and events, and a comprehensive variety of bet types. When paired with theScore’s flagship mobile app, theScore Bet offers a deeply personalized user experience and uniquely integrated media and betting ecosystem. 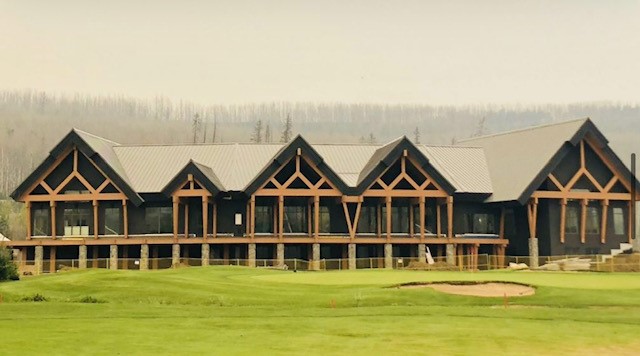 Jack Werhun of Elmhurst Golf & Country Club shot a one under par 71 Thursday in Fort McMurray, Alberta and is tied for 15th on the leaderboard at the Canadian Men’s Mid-Amateur Championship.

With a 54 hole 227 total, Werhun is 15 strokes back of leader Neil Thomas of Edmonton.

Ben Bandura, also of Elmhurst, is at 227. Bandura is one stroke off the lead in the Mid-Masters division following a 75 in his third round. 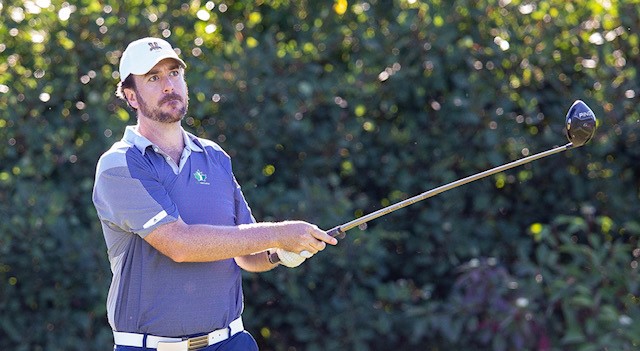 Delwyn Doerksen of Altona is the top Manitoban after 36 holes of play at the Canadian Men’s Mid-Amateur Championship in Fort McMurray, Alberta.

Doerksen, a Golf Manitoba Public Players Club member, shot a one over par 73 and is currently tied for 10th on the leaderboard with a two day total 150

Charles Fitzsimmons of Ontario is atop of the leaderboard shooting even par 72 and leads with a two day total 142.

Elmhurst Golf & Country Club’s Ben Bandura shot a 74 in his second round and is only two strokes off the lead in the Mid-Masters Division. Glen Robinson of Nova Scotia is at 150 (76-74) after 36 holes to lead the way.

The following players made the cut who are also representing Manitoba and Northwestern Ontario:

Missing the cut were: