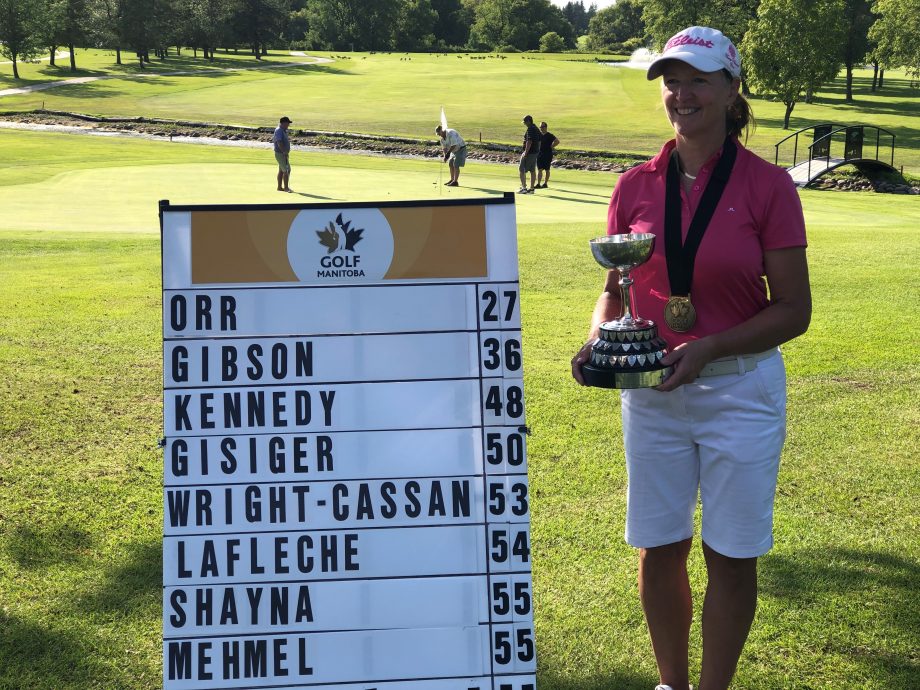 Golf Manitoba (Carman, MB) – The conditions were absolutely perfect in Carman for the third and final round of the 2020 Senior Women’s & Men’s Championships, the final major of the Golf Manitoba event season.

In the women’s championship event, Rhonda Orr of the Southwood Golf & Country Club went wire-to-wire to win her fifth straight senior women’s championship and her seventh in the past eight years. Orr, started the day with a two shot lead over Tammy Gibson of the Niakwa Country Club. Orr put together her best round of the 54-hole event with a 8-over par score of 79 for a three day total of 240. Gibson posted an 86 for a 249 total to finish alone in second place while Gail Kennedy of the St. Charles Country Club also posted 86 to move her into solo third at 261.

In the forward tee division, Karen Saarimaki of the Kenagomisis Golf Club took top honours by shooting a final round 81 to close her tournament with a 248 total. Nancy Porth of the Niakwa Country Club started the day in second place where she finished closing with an 88 and a 261 total.  Saarimaki also took top spot in the Super Senior (60+) division.

In the men’s championship event, Bruce North of the Carman Golf & Curling Club came back from a two shot deficit to capture his second senior title. North, carded an even par round of 71, the low of the day, to edge defending champion Mike Walker of the St. Boniface Golf Club by a single shot. It was a tight finish with North and Walker coming to the last hole tied after Walker dunked his approach shot on the 53rd hole for an eagle two.  On the 54th hole, North holed a 12-foot birdie putt to take the title and the second senior championship that he has won while playing on his home course.

Rounding out the top five was John Multan of the Elmhurst Golf & Country Club who finished alone in third, Allan Wheeler of the Rossmere Country Club took fourth spot, and Al Briscoe of the St. Boniface Golf Club finished in fifth.

In the forward tee division, Barry Minish of the Niakwa Country Club finished with his best round of the event shooting 75 for a 232 total to win by a single shot over Steve Wallace of the Transcona Country Club. Minish also captured the Super Senior title (65+).

Golf Manitoba wishes to extend a sincere thank you to the membership, management and staff at the Carman Golf & Curling Club for being incredible hosts over the past three days. Thank you to PGA of Canada head professional Dean North, MGSA superintendent Rob Hamm and Food and Beverage Manager Robynn Salter.

Special thanks also to Golf Manitoba performance partners Eric Johnson of TaylorMade Golf Canada and Paige Lawrence of adidas golf Canada for their support of our provincial championships.

And last but not least, thank you to all the competitors for your support and your fine play this past week!!!