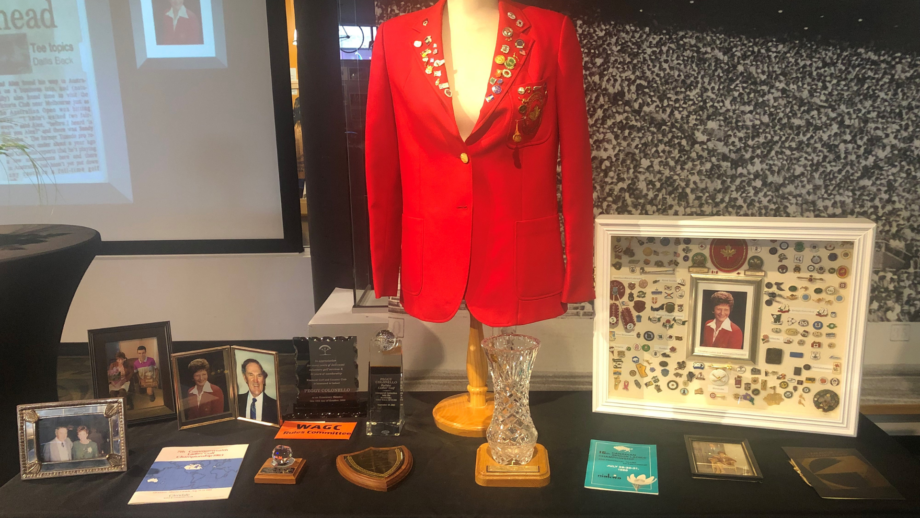 Friends, family and members of the local golf scene gathered this week inside the Manitoba Sports Hall of Fame to celebrate the life of Peggy Colonello.

Colonello, a member of the Manitoba Sports and Golf Halls of Fame, passed away on Wednesday, April 15, 2020 at the age of 97.

Those in attendance spoke of her impact on women’s and junior golf in our province and across the country as an administrator.

“As a junior golfer in Manitoba, I was fortunate enough to develop my game in many great ways thanks to the generosity of Mrs. Colonello” said Jacob Armstrong, of the Golf Manitoba program and now a student at the University of Fraser Valley. “Of many things, I got to attend multiple national championships with the help of the Alex & Peggy Colonello Foundation. These experiences truly grew my love for the game. I am beyond grateful for the outstanding support Mrs. Colonello has always given Junior golf in Manitoba. Thank you Mrs. Colonello”.

Peggy’s volunteerism spanned decades and started in 1974 where she served as president of the Manitoba Ladies’ Golf Association until 1976. Peggy continued her administrative work in golf serving a two-year term as president of the Canadian Ladies’ Golf Association from 1982-83. During her time on the national executive, Peggy attended World and Commonwealth championships in Hong Kong, Australia, New Zealand, Columbia, Britain and Switzerland, including the various Canadian events in which she participated. Peggy, for her contributions to the sport, was inducted into the Manitoba Sports Hall of Fame in 1994 and was an inaugural inductee into the Manitoba Golf Hall of Fame on September 29, 2003.

In 2018 and at the age of 94, Peggy Colonello established the Alex & Peggy Colonello Foundation with a mandate to support junior golf in the province of Manitoba. The Foundation established an unprecedented endowment of $3 million dollars that supports the development of new generations of golfers through grassroots golf initiatives and high-performance programming. Since 2019, the Foundation has supported junior golf programs including the Golf in Schools initiative, provincial junior team development and the University of Manitoba Bisons golf program. The annual induction ceremony for the Manitoba Golf Hall of Fame is also sponsored by the Foundation.