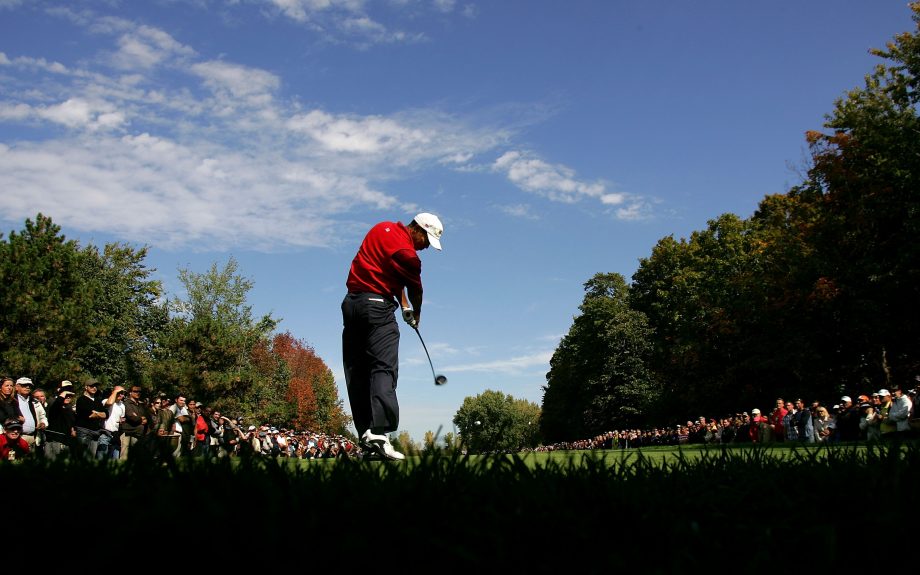 MONTREAL, QC - SEPTEMBER 30: Tiger Woods of the U.S. Team hits his tee shot on the 3rd hole during the final day singles matches at The Presidents Cup at The Royal Montreal Golf Club on September 30, 2007 in Montreal, Quebec, Canada. (Photo by Streeter Lecka/Getty Images)

The 2007 Presidents Cup at The Royal Montreal Golf Club saw two legendary captains lead their respective teams for the final time, with four-time captain Jack Nicklaus guiding the U.S. Team to victory over three-time captain Gary Player and the International Team by a score of 19 ½ – 14 ½. Despite falling short, the highlight for the week for International Team fans was a Sunday Singles victory by Mike Weir over World No. 1 Tiger Woods, with the Canadian being supported by a massive and supercharged gallery of spectators.

“The people of Canada are some of the most loyal and passionate sports fans in the world, and given the overwhelming success of the Presidents Cup in 2007, it was a natural next step for the event to return to The Royal Montreal in 2024,” said PGA TOUR Commissioner Jay Monahan. “Our thanks go out to our global partners, Citi and Rolex, for making the Presidents Cup possible and to the leadership and membership of The Royal Montreal Golf Club, a venue that has already shown it can challenge and highlight the best players in the world. The Presidents Cup continues to grow and expand along with the global growth of our sport while leaving an indelible legacy of giving back throughout the world. I have no doubt that with the support of our fans, the corporate community and governments of Quebec and Canada and the City of Montreal, the Presidents Cup 2024 will continue to the positive trajectory of this event.”

As part of the news, Monahan announced a partnership between First Tee, Golf Canada and Golf Canada Foundation to launch First Tee – Canada. With plans to expand across the nation, the partnership will add First Tee’s youth development program to Golf Canada’s already impressive platform that reaches kids in schools and at golf facilities, helping to empower kids through a lifetime of new challenges and personal growth.

Founded in 1873, The Royal Montreal Golf Club is the oldest golf club in North America. Its Blue Course was designed by Dick Wilson and updated by Rees Jones in 2004 and 2005. In addition to hosting the Presidents Cup, The Royal Montreal has also held the RBC Canadian Open on 10 occasions, most recently in 2014.

“We are excited and more than pleased that we have been selected to host the Presidents Cup again, and we are thrilled that we will be welcoming the world’s best golfers to our club in 2024,” said Michael Richards, Chair of The Royal Montreal Golf Club’s bid committee. “Our club has experienced leadership and great members, and our goal is to make the 2024 Presidents Cup the best ever. With widespread support from leaders of the golf and business communities and from various levels of government and with the help of Tourisme Montreal, we are confident we will succeed.”

Graham DeLaet, Adam Hadwin and Mike Weir are the three Canadians who have competed in the Presidents Cup.

Weir, a five-time Presidents Cup participant, amassed a 13-9-2 record before spending the 2017 and 2019 Presidents Cup serving in the role of a captain’s assistant. Weir was famously drawn against Woods in his Sunday Singles match in 2007, which concluded with Weir winning the final two holes to capture the match, 1-up.

Weir, the first Canadian to compete in the Presidents Cup, was later followed by DeLaet, who made his debut for Captain Nick Price in 2013. DeLaet, 31 years old at the time, delivered an inspiring 3-1-1 performance at Muirfield Village Golf Club, which included a Singles match victory over Jordan Spieth.

“I can only imagine the roars that will be heard around Royal Montreal, especially if a few Canadians are on the team,” DeLaet said. “Having the Presidents Cup is such a great way to grow the game in Canada and it’d be nice to see the International Team lift the Presidents Cup on Canadian soil.”

Hadwin became the third Canadian to participate in the Presidents Cup after qualifying for the 2017 International Team at Liberty National Golf Club. He then returned for the 2019 team thanks to one of four captain’s picks from Ernie Els, which he converted into a 1-1-1 record at The Royal Melbourne Golf Club.

“This is huge for Canadian golf,” Hadwin said. “The state of Canadian golf could not be better and I think it is such an appropriate time to bring it back into Canada. There’s a good chance that a few of us could end up representing the International Team there at Royal Montreal, so that adds to the excitement as well.

“I feel like we have some of the best golf fans in the world in Canada, and to bring a world-class event up to Canada is big for them and I know they’ll be excited to have it back.”

Also announced, Ryan Hart has been named as Executive Director of the 2024 Presidents Cup. Ryan has worked at the TOUR’s Headquarters for over 3 years, most recently as the Tournament Director of THE PLAYERS Championship. Raised in Winnipeg, Canada, Ryan returns home where he previously ran The Players Cup on Mackenzie Tour – PGA TOUR Canada for seven years while leading a local marketing firm. Ryan will be returning to Canada to lead the TOUR’s efforts over the next four years.

Tournament dates for the 2024 Presidents Cup will be announced at later date.