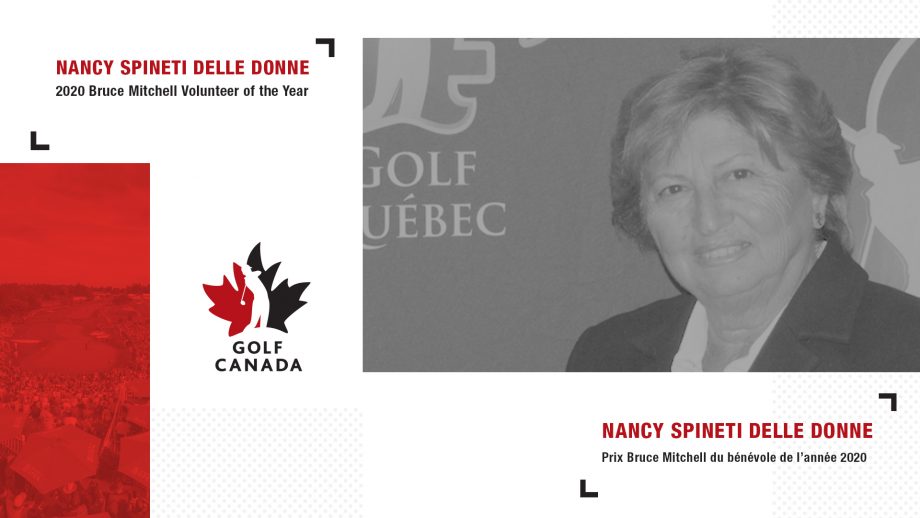 Oakville, Ont. (Golf Canada) – Golf Canada is pleased to announce that Nancy Spineti Delle Donne of Montreal has been named the 2020 recipient of the Bruce Mitchell Volunteer of the Year Award. A presentation of the award will take place on Thursday, March 4 as part of Golf Canada’s Virtual Annual Meeting.

For more than 20 years, Nancy has been a major contributor to Golf Quebec and Golf Canada as an expert in Handicapping and Course Rating.

In 2014, Nancy was named Chair of the Golf Canada Course Rating and Handicap Committee, a position she held proudly until the end of 2020. During this time, she played an integral  role in the national launch of the new World Handicap System which was rolled globally in 2020.

“Volunteers are a driving force behind golf in this country and we are proud to recognize Nancy Spineti Delle Donne for her deep contributions to Handicapping and Course Rating this past year and over the last 20 years,” said Liz Hoffman, Golf Canada’s 1st Vice President who will sworn in as the Association’s 119th President during the Annual Meeting. “Nancy’s contribution to the game and her support in the execution of an important golf service has made and major impact. She has carried those responsibilities with excellence and is truly deserving of this recognition.”

During her tenure with Golf Quebec, Nancy helped to train course rating teams across eight regional associations. She would visit 40+ member clubs a year and has rated nearly 90 courses. Her commitment to the craft included meticulous data collection and support documentation to ensure the highest standard of Golf Quebec’s course rating services.

Nancy has also served as Golf Quebec’s feature presenter for handicap seminars and played an instrumental role in training a province-wide network of club Handicap Committees who supported countless members in establishing a valid Handicap Index. From 2011 to 2014, she was also Chairperson of the Golf Québec Membership Committee.

A public player with provincial contributions dating back to 1997, Nancy was recognized for her exceptional service as Golf Quebec’s 2004 Volunteer of the Year, and in 2020, Golf Québec Board of Directors celebrated her retirement from the association by naming her an Honorary Governor.

Now in its 15th year, candidates for the Bruce Mitchell Volunteer of the Year Award are put forth to Golf Canada for consideration by the respective provincial golf associations in acknowledgment of significant contributions to the game of golf in their community.

The Bruce Mitchell Volunteer of the Year Award is named in recognition of Toronto native Bruce Mitchell who in 2017-18 was the first Canadian to serve as captain of the Royal and Ancient Golf Club of St Andrews (R&A). Born in Victoria and raised in Edmonton, the former president of the Toronto Golf Club and R&A member since 1988 was just the ninth internationally appointed captain of the R&A, one of the most prestigious volunteer positions in the world of golf. Duties as captain included representing the R&A as a global ambassador and aiding in the R&A’s effort to develop golf around the world.

Congratulations to Nancy Spineti Delle Donne of Montreal, Que. on being named the 2020 Bruce Mitchell Volunteer of the Year!