Golf, played well… Or not so well, has immense health benefits 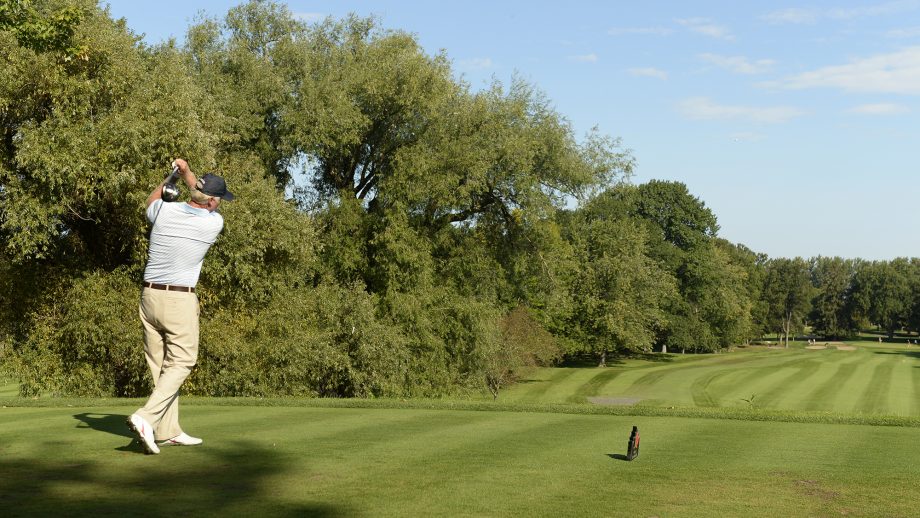 It was another frustrating day on the golf course, where a round that had shown considerable early promise was derailed once again by sloppy play. But my numbers were not all bad. Despite my less than stellar score, there were some positives about that recent round at Peace Portal Golf Course in Surrey.

When I checked the step-counter on my phone, it told me that I had taken more than 13,000 steps during the round and walked about nine kilometres. (Clearly, I did not hit every shot straight down the middle).

I also climbed the equivalent of 23 floors, which is testament to Peace Portal’s hilly terrain. It is numbers like these, rather than the ones I mark on my scorecard, that have convinced me that golf is good for me.

“Both physically and mentally, it is a wonderful sport for men and women and it definitely promotes health,” says Dr. Larry Goldenberg, a Vancouver urologist who is co-founder of the Canadian Men’s Health Foundation. “From a pure health point of view it’s an exercise and exercise equals longevity, it equals better mental health at all ages.

“I like to put it this way when it comes to exercise. If I said I had a pill that you had to take every day and it would decrease your risk of colon cancer, breast cancer, prostate cancer, Alzheimer’s and other forms of dementia, heart attacks, stroke, would you take that pill? Well, that pill is called exercise. There is enough literature out there, there are enough studies out there to prove that without any doubt regular exercise can promote every form of health, including decreasing the risk of dementia and slowing the progress of many neurological diseases.”

Regular golfers don’t have to be convinced about how good the game has been for them. It can certainly be frustrating on those days when the ball just won’t go where it’s supposed to, but they know that even on the bad days the game gives them back so much.

Doug Stone, a 75-year-old White Rock resident, doesn’t have many bad days on the golf course. His handicap is in the low single digits and he often shoots his age at his home course, Peace Portal, where he frustrates his fellow members who regularly must dig into their wallets following a round with Stone.

Stone is in great physical shape and he credits golf with helping him stay that way. “Golf has been an important factor in my physical and mental health,” Stone says. “I currently play three times a week at Peace Portal. Each round is in a competitive environment. I push my cart and never ride. Peace Portal has a number of short, steep hills that are perfect for increasing my cardio-vascular capacity.

“Mentally, golf demands constant focus and decision-making that can only be helpful for one’s mental health. It also provides for socialization with fellow competitors. This has proven to be a godsend during the current pandemic crisis. . .without my ridiculous obsession with golf, this 75-year-old body would not be as healthy as it is today.”

Kris Jonasson, chief executive officer of British Columbia Golf, knows from personal experience that golf has significant health benefits. “It’s not a secret I have multiple sclerosis,” Jonasson says. “I walk today because I wanted to play golf, so it has had a huge benefit to me. I also read the research on golfandhealth.org and am amazed at all the positive benefits we have the data to prove. Parkinson’s, dementia and hundreds of other health issues can be helped with a little exposure to golf. It’s not how good you are at golf, it’s how well golf improves your life.”

Goldenberg, through his work with prostate cancer patients, also knows golf can play a role in recovering from a major illness. “There are a lot of men who have had prostate cancer who golf regularly,” he says. “That is the demographic I work in, the 50- to 80-year-old male and a lot of them play golf. And I think golf helps in the healing process, it helps get them outside, it helps them adapt to the new cancer world they are now in. So I think it helps people fight off depression, anxiety and stress.”

Don Griffiths can attest to that. Griffiths, a former president of the Royal Canadian Golf Association (now Golf Canada), has had a life-long love affair with the game. He played on the University of B.C. golf team back in late 1950s and early 1960s and now, at age 82, still plays three or four times a week at his home course, Point Grey Golf & Country Club in Vancouver. He walks every step of the way and carries his own clubs.

Griffiths thinks golf has helped him live a long life. It also aided in his recovery from a major health issue, when he was diagnosed with prostate cancer 13 years ago. “There was a bit of a delay after surgery until I was able get back to playing, but once I did I felt it was doing me good to get out there and play,” Griffiths says.

“I think golf was one of the things that kept me going. To me, golf is a wonderful game, not only the physical aspect of it, but the mental aspect of it. Getting out there and communicating with my golfing friends is something I really enjoy.”

Dr. Saul Isserow, director of the Centre for Cardiovascular Health at Vancouver General Hospital, says simple common sense suggests that golf, as an exercise, has profound benefits for one’s cardiovascular health. But Isserow, himself an avid player, knows the game also has immense social benefits, “One would think the benefit of social interaction are as much of a benefit as the exercise,” Isserow says.

So the fact is, golf is far from a good walk spoiled. No matter your score or skill level, just remember the game is good for you.