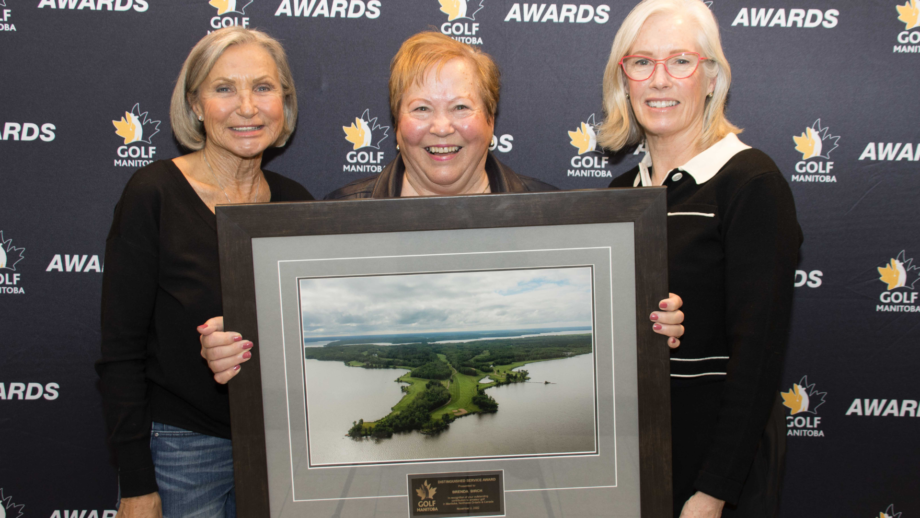 Brenda Burch has been honored as the 17th recipient of the Golf Manitoba Volunteer Distinguished Service Award. The announcement was made during the 2022 Golf Manitoba Awards event that was held on November 2 at the Breezy Bend Country Club.

Brenda began her volunteerism in the early 1970s with the Manitoba Ladies’ Golf Association as the Assistant Tournament Director. After two decades of running championships, she joined the course rating team in 1997 and continued until her retirement in 2019.

During her time with the MLGA and Golf Manitoba, Brenda rated over 110 courses in Manitoba and Northwest Ontario. In addition to her field work, Brenda attended numerous provincial, national and USGA course rating seminars. Her expertise and dedication to course rating earned her the distinction of Level 4 Master Rater, which there are few of in Canada.

Dennis Langrell (1954-2021) was posthumously honored as the 18th recipient of the Golf Manitoba Distinguished Service Award.

Dennis volunteered with Golf Manitoba for over 28 years. He served in various compacities including player development, officiating and most recently as the president of the Golf Manitoba Scholarship Fund until his passing in April of 2021.

Dennis was an instrumental contributor to the junior golf development program with Golf Manitoba.  He assisted in managing the association’s junior boy’s Mundie Putter team, assisted at numerous junior golf camps and acted as non-playing captain for Golf Manitoba at the Canadian Junior and Western Canadian Juvenile Championships.