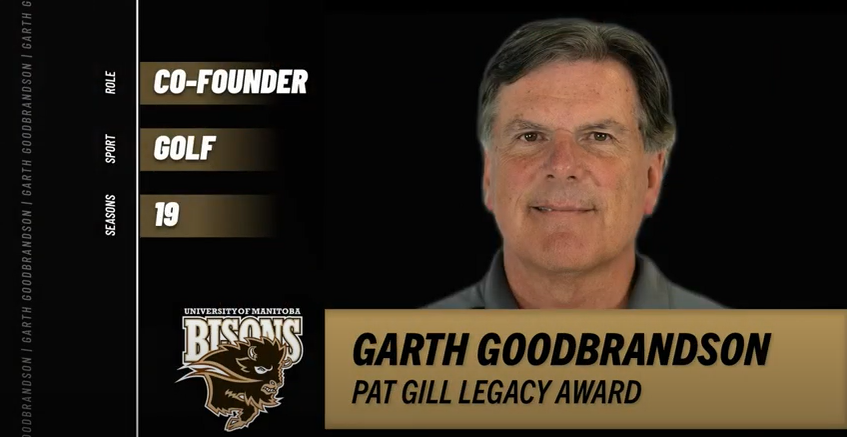 The Pat Gill Legacy Award was created in 2013-14 in the spirit of Pat Gill, who was the long-serving Faculty of Kinesiology & Recreation Management member and Bisons football team manager for over 40 years starting in the mid-1960s before passing away in December 2011.
The seventh recipient of the award is Garth Goodbrandson, head coach and co-founder of the University of Manitoba golf program.

Created in 1999, the goal and directive for Bisons golf was to give talented Manitoba players the opportunity to continue development as golfers while receiving a quality education at home. From day one, the mission statement has always been to develop champions on and off the course.

Goodbrandson has a long history in the sport before creating the Bisons golf program. He was a golf professional at Tuxedo (Assistant, 1982-86), Halcrow Lake (Head 1987-90), Breezy Bend (Associate 1991) and Minnewasta (Head 1992-97). He’s been the Golf Manitoba Director of Player Development since 1997 and was the first coach hired full-time by a provincial golf association.

As a coach, he’s led over 20 provincial teams at national events since 1998 and was named a top 50 teacher in Canada by the National Post in 2007. He’s earned the PGA of Manitoba’s Professional Development Award in 2014 and the Junior Leader of the Year in 1999 and 2000.

All that experience has fed success at UM, where Goodbrandson has been a tireless fundraiser, a great coach, and a real gentleman.

“I think Garth’s work with the Bisons golf team speaks for itself,” said Derrik Goodwin, who assumed head coaching duties of the men’s team in 2019 while Goodbrandson managed the program and led fundraising efforts.

“He basically funded the program out of his own pocket, took his own vehicle to tournaments, and created fundraising initiatives to help the program get established and thrive. I know Garth always speaks very highly of the university and is committed to doing the right thing. He’s a great representative for the program and university.”

Under Goodbrandson’s direction, there have been 36 overall team tournament victories for the Bisons since their start in 1999.