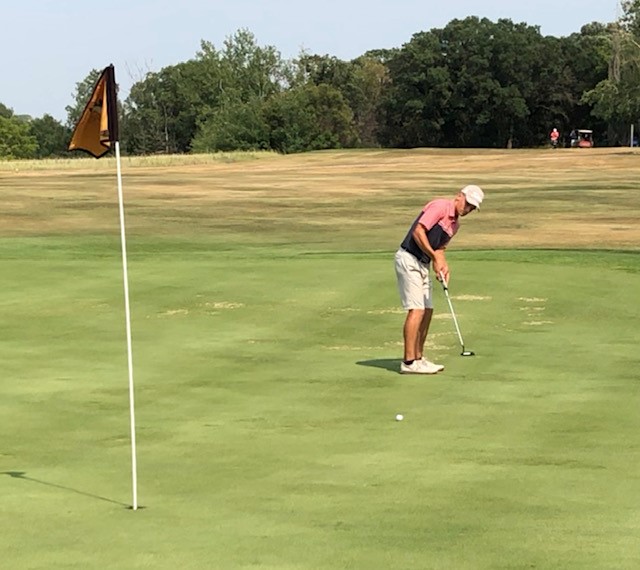 The confidence continues to grow for Winnipeg’s Braxton Kuntz.

Earlier this month, the Breezy Bend Country Club member won the Men’s Junior Championship presented by the Alex & Peggy Colonello Foundation in Shilo, today he tied his career low carding a six under 66 and heads into the final two rounds of the Nott Autocorp Men’s Amateur atop of the leaderboard.

Kuntz fired a 34 on the front and 32 on the back at the Neepawa Golf and Country Club, with his most impressive run featuring birdies on the 7th, 9th, 10th and 11th holes.

Ryan Sholdice, also of Breezy Bend, and first round leader Drew Jones of the Shilo Country Club are one stroke off the lead.  Sholdice made consecutive birdies to finish his round on the 16th, 17th and 18th holes shooting a five under par 67, while Jones finished at even par 72.

Following Friday’s round, the field was cut to the low 60 players and ties, as well as any players within 10 strokes of first place.

Due to the changes to the public health orders issued by the Province of Manitoba, spectators will be allowed at Golf Manitoba Championship events, starting with the 3rd round of the Nott Autocorp Men’s Amateur, Saturday, July 17 at the Neepawa Golf & Country Club.

As stated by the Province of Manitoba, up to 150 people are permitted outdoors in a public space.

A reminder, all persons in attendance at Golf Manitoba events must remain six feet / two meters apart at all times unless you are from the same household or fully immunized.

NOTE:  Spectators will NOT be allowed access to power carts during Rounds 3 & 4 of the Nott Autocorp Men’s Amateur at the Neepawa Golf & Country Club.