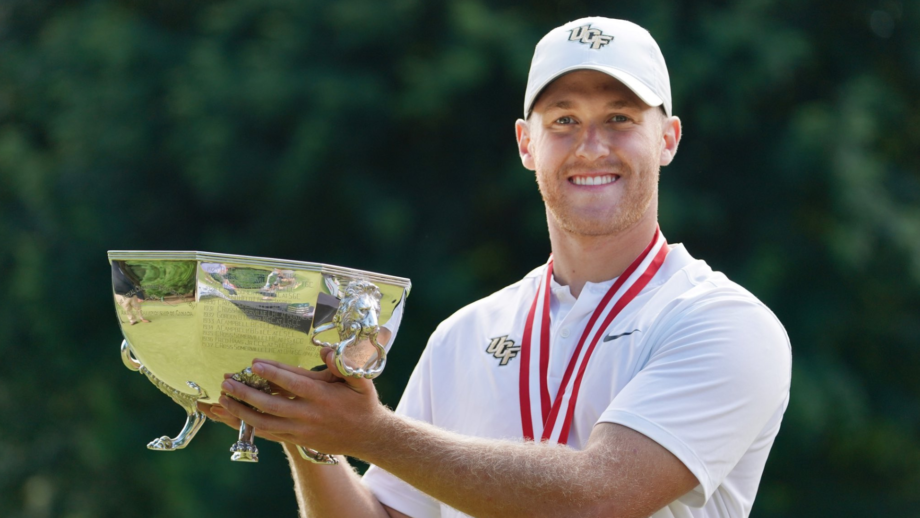 When Luis Carrera woke up Thursday morning over 4800 kilometres from his hometown in Mexico City, Mexico, the Canadian Men’s Amateur title was an attainable dream he could visualize if he stayed confident. Clearly, the strategy worked. Carrera fired a 66 during the final round at Point Grey Golf and Country Club to claim the title for the117th Canadian Men’s Amateur Championship, presented by BDO.

“I was like, I think I can win this if I play good, but I’ve got to go get it,” said Carrera. “I’ve got to go take the chances that I get, and I’ve got to make some putts, and I knew I had to come and play well.”

The 22-year-old came out of the gate hot this morning when he made eagle on his first hole. The momentum catapulted him up the leaderboard and his consistent play awarded him a solid, bogey-free round.

“I made some good putts today,” he recalled about his most memorable moments of the tournament. “But I think the eagle on one [would be the most memorable]. That really got me going.”

Carrera might be a long way from home, but the University of Central Florida senior quickly won over the hometown crowd at Point Grey. With a near-tangible excitement, a beaming Carrera hoisted the prestigious Earl Grey Cup to a round of enthusiastic applause and, after a quick lesson, sabered a bottle of champagne to celebrate.

With the win, Carrera becomes only the second Mexican golfer and first since Rafael Alarcon in 1979 to take home the title.

Arriving at the course on Tuesday, the 22-year old found an unexpected piece of home when he ran into Rodrigo Pena, a golf services employee at Point Grey Golf and Country Club and an old friend who shared membership at same club in Mexico City. The surprise clandestine meeting led to Rodrigo serving as Carrera’s caddie for the final round and, well, the rest is history.

Carrera and Mississauga, Ont. native Robbie Latter went wire to wire for the majority of the day, with Latter finishing just two strokes back for the tournament at -8. In third place was Canadian Remi Chartier at 6-under.

Along with the title, Carrera has earned an exemption into the 2023 RBC Canadian Open at Oakdale Golf & Country Club, as well as the 2022 U.S. Amateur Championship being contested August 15-22 in Paramus, N.J. This was his first time competing in the Canadian Men’s Amateur Championship, presented by BDO.

Marco Trstenjak of Elmhurst Golf & Country Club was the highest finishing Manitoban on the leaderboard at T54. He shot a final round 74 to finish the tournament at 291.

Ryan McMillan, also of Elmhurst, carded his second straight 77 to finish at 298.